You are here: Home » Argentina » Expeditions in Argentina 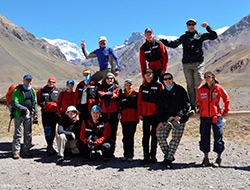 About Aconcagua: Mt Aconcagua is the center and main motive of the Aconcagua Provincial Park , one of the most spectacular protected areas of the Republic of Argentina . Aconcagua route 360: is the name of a successful attempt by Briton Jason Lewis to be the first person to circumnavigate the globe using only human power – no motors or sails. It was begun by Lewis and Stevie Smith in 1994 and ended at 12:24 pm on 6 October 2007, when Lewis re-crossed the prime meridian at Greenwich, London, having travelled 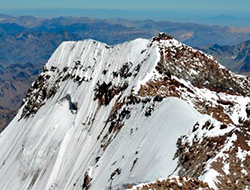 About Aconcagua: Stand on the highest spot of the Southern Hemisphere and observe the magnificence of The Andes The normal route is technically easy. The hard part is the altitude. This is why we are so careful with the acclimatization. The approach to Plaza de Mulas is a long distance of about 40 km. We are also used to making acclimatization trekking to Plaza Francia, the Base Camp of the Southern Wall. It takes us three days to get to Plaza de Mulas. To reach a better acclimatization and to enjoy a unique view of the Aconcagua we will make a trekking to Mt Bonete (4900 mts) . .